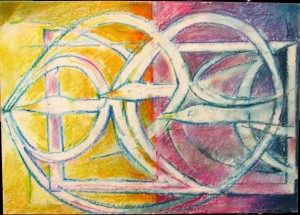 The harsh landscape of the North, from Settle to Shetland, was the inspiration behind Peter Osborneâs second exhibition at Gallery on the Green in two and a half years.

In 2019 he showed his water colours of the out-barns of Bowland, drawing attention to the deteriorating state of buildings that once were central to the local farming economy. For this exhibition he used the deeper and more intense oil pastels to look at the relationship between the hard landscape of the North and its spiritual history.

The Lancaster based artists said: âThe title âOil Pastel Northâ is two-fold: medium and subject, but they combine in a particular way.Â  The subject âNorthâ is, physically, from Settle to Shetland, but more deeply something else.Â  North is hard and challenging, further north more spiritual.Â  In the exhibition the physical things seen and the spiritual things encountered are juxtaposed:Â  near a Shetland cliff where the sea smashes into a wound of a geo, is the martyrdom of Edmond (from Pickering Church) into whose flesh tear the arrows.Â  The weather-beaten rocks of Brimham reflect the damage to an ancient Anglo-Saxon reredos.Â  Weather-torn posts on the bare fells take on the persona of the âold rugged crossâ.Â  Thus images are shown together less by subject than for deeper rapport.

Peter said: âIn the small scale of the Gallery on the Green these themes needed more intensity than water-colour can give but which oil pastel can.Â  It is not good for detail but it has a density in both colour and application.Â  It offers richness of colour, with clear hues and contrasts, and also the possibility of more expressive marks and handling, even impasto.Â  It feels more suitable for accommodating the hardness and suffering of the subject.â

Peter Osborne was born in Norfolk. His early memories are of foghorns at sea and bitterns booming!Â  Aged seven, he was invited by bird artist Roland Green to learn in his studio: cleaning brushes, meeting artist friends and learning toÂ  draw.

After university he undertook post-graduate study at the Courtauld Institute, before going on to lecture at art colleges in Lancaster and Blackpool, eventually becoming Â head of school at Blackburn.

Peter has exhibited at Abbot Hall, London Regent Street and the Yorkshire Sculpture Park . He has also featured in the Lunesdale Studio Trail.

He is chairman of Christian Arts, and in that capacity has exhibited Â in Worcester Cathedral and Lancaster Priory Church. 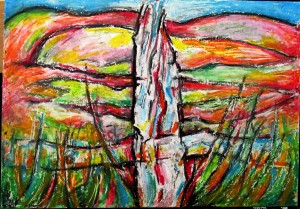