Who will survive this?

ââWho will survive this?â That is the question posed by theÂ exhibition that opened at the Gallery on September 24 and closed on November 27.

Â The installation was created by poet Sue Vickerman and photographer Mike Kilyon and relates to the year that the two spent working in Shanghai.

Â Sue says, ‘Mike’s “photographer’s eye” got really focused on the demolition and destruction of all that was old and historic, while as a writer my thoughts very much turned to apocalyptic calamities – how stable is this Â transformationâ at break-neck speedâ into a space-age city? Couldn’t it all fall down as quickly as it has gone up? I was thinking of the Twin Towers.’Â

Â Mike worked with Glasgow Art School to get his images digitally printed onto silk Â for the installation, seeking a transparent and ephemeral effect suggesting that not even our buildings whether ancient or modern, are solid and reliable any more in this massively transforming world.Â

Â The pair promise that a visit to the installation will reveal some rather unexpected answers!

Â Photographer Mike achieved his long-held wish to move to Settle one year ago after many years living in Baildon (Bradford). Bradford-born Sue Vickerman hasÂ lived and worked in several countries but is for the time being settled in the UK, dividing her time between Bradford and Settle.â

Â In advance of the opening of the exhibition Sue and Mike appeared at the Saltaire Festival where their Shanghai Odyssey show featured videos, as well as Mikeâs photographs, Sueâs poetry and paintings by Jane Fielder, who visited them whilst they were in Shanghai.

Â The photographs belowÂ show Mike and Sue at the gallery, together with scenes at the launch party held on the Green at the opening of the exhibition. 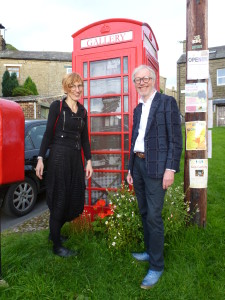 Sue and Mike at the Survive launch 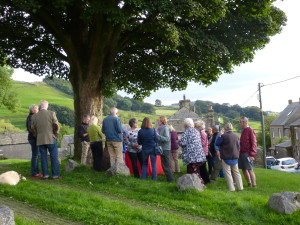 Who will survive this? – launch party 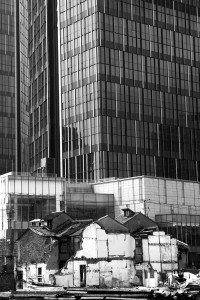 One of the scenes from Shanghai that inspired the installation.