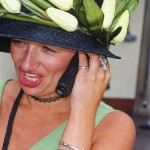 âWith photography, I like to create a fiction of reality. I try and do this by taking societyâs natural prejudice and giving this a twist.â For over fifteen years Martin Parr has photographed the changing use of the mobile phone as he travelled the world as one of the worldâs leading documentary photographers. This exhibition is a visual delight as it traces the use of the mobile phone in widely different cultures and contexts, from Ascot to Argentina and from Scarborough to Seoul. It reveals the way in which the mobile phone has entered society everywhere where it is now used as a tool of social networking; a political tool of influence; an encyclopaedia of information, a fashion accessory; a means of emancipation; and a means of documenting oneâs own private world through its camera and video capture. And now the culture of âappsâ has begun to extend its use into new worlds of data and entertainment in ways that were unimaginable when Parr began this series. They are everywhere and anywhere, and it is a sweet irony that we should be celebrating its dominance in our culture when it is this technology that led to the decommissioning of the K6 phone box which now houses the Gallery on the Green. More information at www.martinparr.com/