Return of the Twelve Days of Christmas 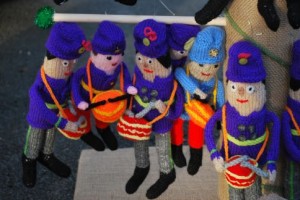 Drummers drumming. A small part of the exhibition

Six years ago the Gallery staged one of its most popular and most imaginative exhibitions. The 78 tiny all knitted figures that act out the words of the Twelve Days of Christmas amazed visitors and set many of them reciting the lines about what their true love gave to them on each of those days of Christmas.

The eight ladies knitting who produced the exhibition are:Â Jeanne Carr, Catherine Holland, Shirley Crosby, Alison Tyas, Joyce Elliot, Jacqui Lewington, Betty Beesley and Janet Lillywhite. The eight came forward in response to an article in Settle Community News and their work has subsequently been displayed elsewhere in Settle after its initial appearance in the gallery. The story of the twelve days and its creators formed part of our tenth anniversary celebration exhibition at the Folly this summer and it seemed appropriate to reunite the exhibition with its first home for the 2019 Christmas exhibition.

The full story of the twelve days and it relation with other exhibitions was captured in this board from our tenth anniversary exhibition.